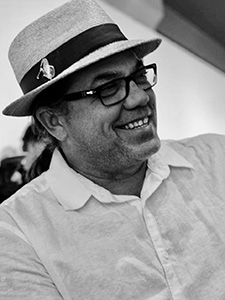 A. Razor was born in Brooklyn, N.Y. in 1963, and brought to California at the age of one. Raised with a strong desire to read and write, but an even greater desire to survive his circumstances, which has aided his experience and longevity so far. He began writing and publishing in Los Angeles, around 1980 in various underground zines and publications. Expanding outward from there, he was discovered by Drew Blood Press, Ltd. in 1984, where he published 11 chapbooks up to 1995. He has read his work at many readings and spoken word events over the years and been published in many types of publications, ranging from those that are considered reputable to those that are of ill repute. He has fought hard to live and express his art in many different ways and in many different places. He became a member of the Hollywood Institute of Poetics in Los Angeles, CA in 2009. He has participated recently in the Poets In Prison panel at Beyond Baroque and the 2011 ALOUD reading series held at the Downtown Los Angeles Public Library. In 2012 he teamed up with Iris Berry to launch Punk Hostage Press, on which he released six titles of his own work and edited 10 more titles from as many writers, Danny Baker, Iris Berry, C.V. Auchterlonie, Carolyn Srygley-Moore, Rich Ferguson, Dennis Cruz, Frank Reardon, Alexandra Naughton, SB Stokes and Hollie Hardy. He collaborated on book cover designs with graphic artist Geoff Melville for many of these books. His writing has always explored the world that he has sought to be a part of and to rebel against at the same paradoxical moment. He has traveled extensively, seeking and enduring everything from homelessness and imprisonment to serenity and peace.

Books by A. Razor: Better Than A Gun In A Knife Fight , Drawn Blood: Collected Works on D.B.P.,Ltd. 1985-1995,  Small Catastrophes in a Big World, Beaten Up Beaten Down, Half-Century Status ,  Days of Xmas Poems, and Puro Purismo