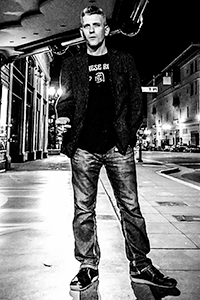 Born and bred in Barcelona, Danny Garcia started his career writing for Spanish music magazines in the ’90s and has contributed to a number of publications, including the notorious US magazine High Times. By the early 2000s, Garcia was already writing, directing and producing a series of short documentaries for BTV, Barcelona’s local Television station.

In 2012, Garcia directed The Rise and Fall of The Clash, a controversial film dealing with the obscure end of the Clash. In 2014, Looking For Johnny, Garcia’s documentary on the legendary New York Dolls’ guitarist Johnny Thunders, was released worldwide. Looking for Johnny peaked at #10 in the Billboard Music DVD charts in the US, and #1 in Sweden and Japan. In 2016, after a successful film festival run, Sad Vacation, his documentary on Sid and Nancy, was also released worldwide. He has just completed a new music documentary on Stiv Bators.

In 2019, Garcia released two new music documentaries, the critically acclaimed STIV: No Compromise No Regrets and his most recent Rolling Stone: Life and Death of Brian Jones.