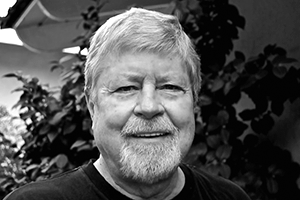 Lee Quarnstrom has asked his wife to order just one memorial word on his gravestone – Beatnik.Born in a small Washington lumber mill town and raised for the most part there and in Chicago, Quarnstrom moved to the Bay Area in the mid-1960s in time to join the Merry Band of Pranksters, the acid-fueled crew aboard author Ken Kesey’s psychedelically painted bus with “Further” as its destination and a warning across its rear: “Caution, Weird Load.” With the musical Grateful Dead in tow, the Pranksters brought psychedelia to the west coast with their famed Acid Tests!

Prior to his move to California, Quarnstrom was a young Chicago newspaperman in the final days of the Windy City’s old-time, “Front Page” journalism. Lucky enough to have read Jack Kerouac’s ON THE ROAD before freeways replaced two-lane blacktop roads, he began years of wandering by sticking out his thumb and hitching rides back and forth and up and down around the country. Stops along the way included New York City, Mexico City, Seattle, a remote redwood canyon in the Santa Cruz Mountains, nearby Santa Cruz, and Los Angeles, where he was Executive Editor of the notorious smut magazine, Hustler.Quarnstrom did, in fact, spend one summer felling tall trees and blasting boulders as Assistant Dynamiter on an Olympic National Park trail crew. And the woman he’s asked to describe him on that tombstone is indeed his seventh wife.

Buy now: When I Was a Dynamiter! Or, How a Nice Catholic Boy Became a Merry Prankster, a Pornographer, and a Bridegroom Seven Times