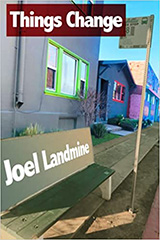 If you want to read about subversive pop culture, stanky substance abuse, dejected relationships, overt self-depreciation, and the despair of living in a dystopian future, then Joel Landmine is your man. He will not disappoint. His first book of poetry Yeah, Well… set the tone. Now Things Change is going to kick that tone’s ass and set the bar even higher. It’d be really lame to announce something like, “Joel Landmine is a poet to keep your eye on as he’s going places,” because he already left for that higher ground and we’re the ones trailing behind. ~ Patrick O’Neil, from his foreword. Author of Gun, Needle, Spoon.