Stealing The Midnight From a Handful of Days 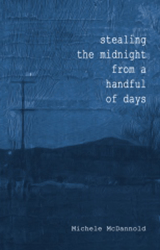 Michele McDannold’s, Stealing the Midnight from a Handful of Days is the recollection of a young woman for whom each moment, breath, event of the day is trapped in memory. She greets sin as common, sorrow as an ally and joy as a mishap. Her poems are elegant in the telling of her innocence. It isn’t that she hasn’t seen the dark side, or been touched in undeserving ways. She has. Somehow she has embraced these moments, allowed herself to dream big and has stepped beyond the constraints of a mid-west upbringing. Michele’s poems come from those deep places, where secrets hide and she writes them with a fearless heart.

Buy now: Stealing The Midnight From a Handful of Days